Skip to content
The Trusted Name For Independent Media Solutions

VANCOUVER, BC – November 3, 2018 – Western Media Group (“WMG”), the Canadian supplier of trusted independent media solutions, is pleased to announce that River Country is the new name of YL Country. Broadcasting at 94.9 FM in the Peace River region of Alberta, River Country is the largest terrestrial radio operator in Northern Alberta.

“River Country represents one of Canada’s best opportunities for advertisers. It has a massive coverage footprint that spans from the BC Alberta border throughout the entire Peace Region of Alberta – and includes RDS so listeners can see the artist and song titles in their vehicles. This is a radio station with fantastic reach and, because of the location, an excellent competitive media buy,” said David St Laurent, CEO of Western Media Group. The station can be heard on-line at www.rivercountry.fm 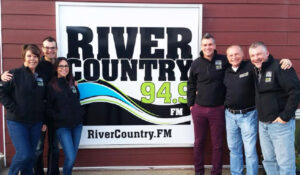 CKYL is operated by Peace River Broadcasting. Owner, Terry Babiy confirmed that listeners can still expect to hear country music on 94.9, but classic rock has been added to the mix.

Babiy explains 94.9 FM’s new name is inspired by the geography of our region.

“River Country doesn’t necessarily just mean country music, it’s a designation of where we live. No matter where you live in our region, a river is no more than 30 minutes away from your town or community, and we are just a community of rivers. So we have made this a geographical statement that we are indeed ‘River Country’ both here in our coverage area in the Peace River block as well as High Level.” — Terry Babiy, CEO, Peace River Broadcasting

Babiy says the new sound of CKYL was inspired by the up-tempo, fun music you might hear at a wedding.

“Let’s throw some music in a blender,” says Chris Black, General Manager. “Let’s not forget about country, but let’s add in a few things like some John Fogerty, some Creedence Clearwater, maybe the odd Rod Stewart song. This is something we’re excited to try. It’s a unique format, it’s going to be a different listening experience and I hope everyone enjoys it.”